John worked for a company that pulled reefer trailers. For the most part, John kept the same trailer couple all of the time – that is unless the truck or trailer needed service. On March 30th his trailer needed to be dropped at the company shop for service to the refer unit. The company had a very small area to park trailers, so all of the trailers were dropped pretty close to one another. In fact, there was only about 5 feet of clearance on either side of his trailer when John backed his trailer into the only empty spot he could find. He climbed out of his truck, lowered the landing gear and grabbed his fifthwheel hook. Once he reached his 5th wheel pull hook under the trailer and began to pull, he noticed that the fifth-wheel release was a bit stubborn and that he would need to pull harder. 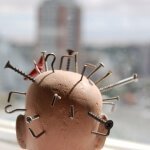 As John pulled hard, the hook came loose and he flew backwards into the next trailer. The back of his head struck the bottom edge of that trailer causing a 2 inch cut that bled profusely. He ran to the office with his bloodsoaked hand covering the cut. The mechanic (who was also an EMT for the local fire department) was there and provided first-aid, getting the bleeding under control. John was then taken to the local hospital where he received 17 stitches.

Although John only lost 2 days of work because of this incident any head trauma is serious. Certainly for John the following life lesson will forever be embedded in his mind.

Using a 5th wheel pull hook is recommended. However, soft-metal hooks (such as those made from aluminum) are unsafe as they are too susceptible to bending.

Equip truck drivers and operators and promote safety with the proper tools needed to help them avoid injury.

The OPNBar tool, for instance can help avoid some injuries by providing an ergonomic means of opening shipping containers, checking for low pressure tires, and aiding operators in releasing the tractor from the trailer.

Door Latch Handle Extender is a safety leverage bar to assist the truck driver and operator in opening ad closing shipping container doors. Great for opening shipping and cargo containers that are iced over!